Turn off Text autocorrect On iPhone, iPad Or Mac

The World Of Software September 24, 2018 How To, iPhone, Tutorial Leave a comment 15 Views 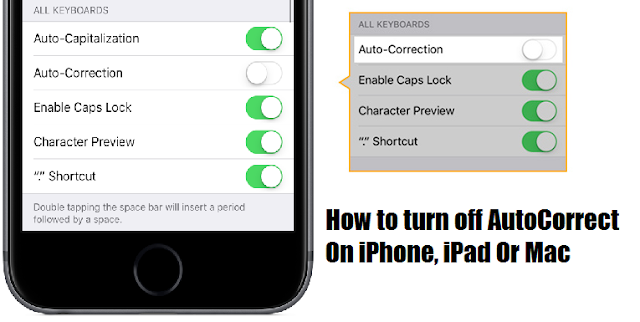 Turn Off autocorrect In iPhone, iPad Or Mac

How To Turn Off Text autocorrect On iPhone, iPad Or Mac. Apple’s text correction for iPhone, iPad, and Mac, known as Autocorrect (officially Auto-Correction) is great for fast typing, but it often changes words in your messages.
When it gets things wrong in this way, Autocorrect can be hilarious, but also annoying. If you decide you’ve had enough, suffer no longer: here’s our guide to turning Autocorrect off.

How to turn off Autocorrect on the iPhone or iPad

Some iPhone Users Love Auto correct while Some just hate this Feature on their phone. Auto corrects are in there for a reason. Most of the time while texting we tend to make spelling mistakes, But they get corrected automatically with this feature. On the Other hand, It can be really frustrating when the outcome is a word that you don’t intend to type. Yeah, many times its Funny and Embarrassing too.  Do I need to say how many countless times we have seen Text Conversations Pics with Autocorrect fails on Social Media?
If you’ve decided that you no longer want Autocorrect to be a part of your iPad/iPhone experience, then you can head into settings to turn it off. Follow these steps to turn off Autocorrect. Its a feature that is designed to help people to have better testing experience but for some users its the Opposite. Well, for those the best option would be Turn off Autocorrect on their phone. So today I will be writing a Quick guide on How to Turn off Autocorrect on iPhone, iPad Etc. At the Bottom of this post, I will even Share some Tips to Correctly use Autocorrect feature in iPhone’s.
Tap Settings > General > Keyboards.
Set the Auto-Correction setting to Off.
1: Go To Settings.
2: Now tap on General.
3: Next you must Scroll down a little bit to find Keyboard.
4: Now you will see Auto-Correction which will be ON, Just Slide it towards the Left to turn it off. How to turn off Autocorrect on the Mac

Auto-Correction also appears in Mac OS X. While it’s not such a problem in OS X (because typing on a keyboard is generally more accurate), it can still cause problems. If you’ve decided that you no longer want to use Auto-Correction in OS X, follow these steps:
Now as you type in OS X you will no longer find words corrected automatically. With Autocorrect turned off you will be able to spell words however you want.

A couple of  Tweaks to use Autocorrect Feature

So in the above part, you saw How to Turn off Autocorrect on iPhone but If you like this feature and just don’t want to use it because it irritates you when it suggests wrong words, Then you might want to keep it ON but Do some tweaks that may help you henceforth. So below i am listing some tips & Tweaks that you can perform and see if that helps.
Auto corrects learns the words that you type frequently and suggests you the same based on that but many times it learns incorrect words so you need to tell autocorrect what you are trying to type. To do so you can navigate to Settings>General>Keywords>Shortcuts, and type the word that you use more frequently and the word that it guesses incorrect. Next time Autocorrect will show you correct word that you are trying to type.
Another Good way to Stop Autocorrect suggesting your wrong words is to Erase all the words that your phone as learned which means setting it to Default. Just navigate to Settings>General>Reset and tap on Reset Keyboard Dictionary. What it does now is once again it will try and learn your texting habits from the beginning.

September 24, 2018
The World Of Software
Autocorrect, How To, iPad, iPhone, Mac, tutorial
Email ThisBlogThis!Share to TwitterShare to Facebook