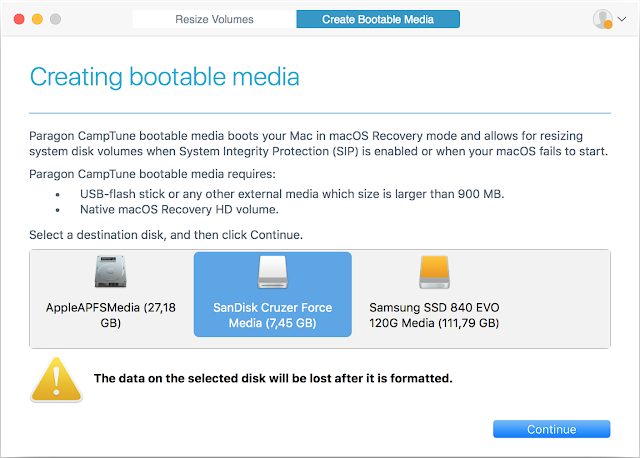 Paragon Camptune 2019. Paragon Camptune X  – is simply the fastest way to perform resize operations. Instead of spending your time juggling with archives, disks and applications, use it to do something more creative with your Mac!
The downloadable Camptune X from Paragon helps you redistribute free space between HFS+ for Windows by Paragon Software volumes in Boot Camp with minimal effort. You do not need to waste your time on installation and pre-configuration, just launch it under Mac OS X. It also avoids forced restart of your system to apply the changes.
Let’s think about when Mac users need to reallocate free space, you’d need to back up the Boot Camp partition, delete the partition, recreate an NTFS partition with a new size and, finally, restore the Windows partition backup to the new NTFS partition, a process that could take anywhere between two to five hours. Fortunately, Paragon Software has developed Camptune X, which achieves the same result in a matter of minutes!

You may ask, “Why would I ever need to resize volumes on my Mac?” It’s only a matter of time until one of the volumes becomes overfilled with data and you’ll need to free up some disk space. It’s likely that the necessary space will be located on an adjacent partition that contains another operating system and, just like that, you’ll need to resize both of the volumes to add some free space to one of them.
In the past, resizing Boot Camp partitions was a long, time-consuming and tedious procedure. Obtaining a volume of the desired size often meant spending hours waiting for backup operations to finish, watching for volumes to move their borders and images to be written back. Now you can perform these operations in minutes.
Additional parameters of the Paragon Camptune X :

Does it work in OS X El Capitan with System Integrity Protection?

Yes it does! If you’re running the product on Mac OS X El Capitan where the System Integrity Protection (SIP) is enabled, you will be prompted to create a special boot media to do redistribution of free space from it (see the Creating Boot Media section in User manual). You can then use the boot media in order to perform resize operations. Alternatively, you can switch off SIP and do redistribution directly in Mac OS X (see the Disabling SIP section). Learn more about this issue in our Knowledge Base.

How does it work?

When does traditional repartitioning take so long?

Being that, there were no adequate tools available to help rearrange space between NTFS and HFS volumes. with the result that A common method was a sequence of backup, delete as well as recover operations – with key drawbacks – consisting of the following basic steps:
The drawbacks:
This method, further from consisting of many complicated manual operations, also requires the physical possession of a Windows installation disk to complete the operations. In addition, this manual procedure allows disk space to be added to the NTFS volume only – the NTFS image cannot be restored to the smaller Boot Camp volume once the HFS+ volume is enlarged.
Paragon Migrate OS to SSD 4.0 (English)

How does Paragon Camptune X solve the problem?

Paragon Camptune X is a specially designed utility that rearranges disk space on dual-system computers. It has a very simple interface with few buttons. To perform the resize with Camptune X, there are only three basic steps:
The benefits of using Paragon Camptune X:
*Boot Media Builder is not yet compatible with macOS Sierra.
*macOS Sierra supported with disabled SIP only.