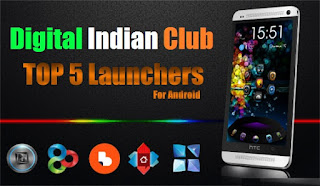 Which launcher is best for Android?

There are tons of launchers available for android — these are some of the Top Best 5 Android Launcher 2019 are the way Android users customize their smartphone and tablet experience.  If you’re looking for a change of pace from the out-of-box software experience on your phone, consider a new launcher. We’ve found the best ones available today, and listed all of the pros and cons of each.

What is a launcher on an Android phone?

One of the best things about Android is the ability to quickly and easily customize the experience to suit your preferences. Many times this simply involves arranging your favorite apps into folders or throwing in a great widget, but sometimes it’s good to dig a little deeper. Launchers, or home screen replacements, provide a quick and easy way to do this, often drastically altering the look and feel of a device. Read on, as we highlight five great options for customizing your Android experience.

GO Launcher 5 has arrived! Its UI and UX has been recreated from bottom to top. Enjoy simple and intelligent new mobile experience, or start customizing the looking and feel in your own way. GO Launcher Best ish ever With all the different themes, transitions, options, backgrounds, icon packs, on n on n on n on. This is the very best home launcher out there. You can literally change everything about your phone once a week, or find a setup u really like, back it up, n never worry about losing it. Comes as free
GO Launcher  Free
Price: Free / $
Download On Google Play

Google Now Launcher was Google’s first public launcher, and it was shipped on Nexus phones as well as millions of other devices thanks to its inclusion in the Google Mobile Service package that Google offers to manufacturers.  Google’s first publicly-available Android launcher is now listed as incompatible with most devices on the Play Store.
Google Now Launcher (free)
Price: Free / $
Download On Google Play

When you first install Themer, it instantly makes its intentions clear with the promise that you’re about to “make your phone look amazing”. The launcher provides access to a wide range of themes that drastically change the look and functionality of your home screen, and are wildly different from each other. The software also makes some changes to the app drawer, adding a “categories” view that groups similar applications together.
Themer Launcher (free)
Price: Free / $
Download On Google Play

Nova takes a more traditional approach to Android, providing a familiar looking, but highly customizable take on the classic home screen. Animations take on a more three-dimensional feel, icons can be placed more freely and you can customise the dock to look and behave as you want. You can also adjust icon font style, hide the notification and search bars, add customizable pinch gestures and much more.
Price: Free / $
Download On Google Play

We’re cheating a little here, as Cover is more of a lock screen replacement than a home screen replacement. Cover seeks to augment your launcher’s functionality, providing an all new lock screen that gives you a location-aware list of apps that can be opened with a simple swipe. It also provides a quick new way to switch between apps.
Cover Lock Screen Free
Price: Free / $
Download On Google Play
That ends our list of the 5 best Android launchers that you can install to revamp your Android in 2019. I hope that you were able to find your favorite launcher from the list.  Also, if there’s a launcher which according to you deserves to be on the list but isn’t, drop its name down too.